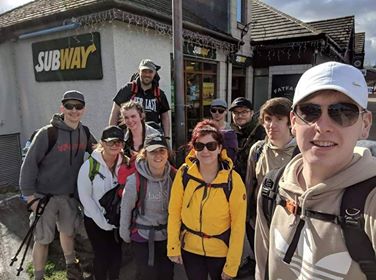 After months of planning, last weekend we set out on our epic 66-mile Speyside Way walk. It was an early start but spirits were high and after a couple of hours on the train, 10 of us disembarked in Aviemore ready to take on the challenge.

Or so we thought.

The hottest weekend of the year so far was welcomed by almost all of Scotland, apart from a small group of kickboxers… However, we forged ahead and made our 17-mile day one checkpoint at the Ben Mhor hotel in  Grantown-on-Spey. With feet strapped up and sweat chiselled off, we had a quick bite to eat before collapsing in our rooms.

Day two started slowly, with aches and pains from day one causing issues but we pushed on. However, 7 miles in, some of the team started to get serious problems, with open blisters and sores making walking increasingly difficult. By mile 10, a large percentage of the team were physically incapable of walking. The 27+ degree heat and 30kg backpacks meant conditions were getting worse. With the Aberdeen Open on 7 days away, we risked losing over 50% of our fighters due to foot injuries, so a decision was made that Sensei John and Mike Dee would push on to Aberlour (an additional 15 miles) to ensure the distance was covered, and that we would complete the final day – another 25 miles – once the Aberdeen Open had passed.

There’s no doubt the whole team were disappointed, but risking health and well-being is not what Eastern Tigers is about. We will complete the distance; that’s what we promised our sponsors and that’s what we will do.

We hope you enjoy our video of the Speyside progress so far!